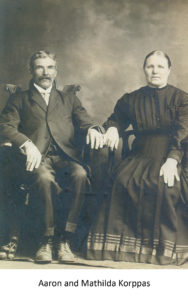 Aaron Petterson Korppas was born on February 12, 1862 in Finland. Mathilda Pettersdotter Broas was born on March 10, 1866 in Svartback, Finland. They were married on October 17, 1884 in Phytaa Viipuri, Finland. Three children were born to them in Finland, Fanny on February 22, 1884, Victor on December 12, 1895 and Anna on December 23, 1898. Aaron left Finland August 3, 1901 on the ship Arcturus and Mathilda, Fanny and Victor left on July 5, 1902, also on the ship Arcturus, their destination Duluth, Minnesota. They came from Duluth to Herbster on the ship America. Aaron bought land on Bark Point where they had a small farm. A daughter, Hylda, was born there September 1, 1907. Aaron was active in their new community and Mathilda was a midwife and baked the best cinnamon rolls made with cardamom, along with her other accomplishments. 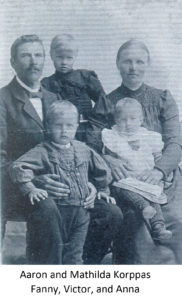 Victor married his first wife, Elsie, and they had two sons, Leo and Vyron. They both served in the United States Army during World War II. Leo was a sergeant in the 5th Infantry and died on July 30, 1944 in Normandy and is buried there. The Korppas-Johnson Legion Post in Port Wing is named in his honor. Victor married Violet Christianson after Elsie passed away in childbirth, and they had one son. Victor died as a result of a hunting accident on January 24, 1937.

Anna married Lee J. Clark on September 6, 1916 in Port Wing, and they built a home on Busche Town Road, later owned by the Schneider family. Later they moved to Excelsior, Minnesota. They had one son, Roland, who died in his early 20’s as the result of a fall from the wing of an airplane at Wold Chamberlain Airfield in the Twin Cities. He had also served in the Army in World War II. Anna lived to be 88 years old.

Fanny and Hylda both married and lived in Herbster to raise their families. In his later years, Aaron became blind, his wife, Mathilda, died on December 20, 1943, and Aaron died on January 13, 1948. They had lived a full life on their farm in the United States in the small town of Herbster.