THE STORY OF MARKKULA PROPERTY 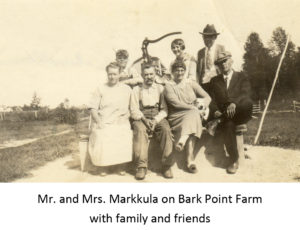 Young couples from Finland claimed land on Bark Point and settled their homesteads several years before the date when Clover Township was formed. Their story, their names and the names of their descendants, is well told in The Cranberry Chronicles by Robert Uedelhofen.

Henry and Wilhelmina Markkula came from Finland according to their grandson Paul. They had three children, son Victor, daughter Ellen, and another son Toivo (Paul’s father). Ellen was born in Champion, Michigan in 1904; Toivo was born on Bark Point in May, 1912. Henry and Miina (as she was known), came with their children to Bark Point, purchased their land in 1908, and kept it intact (and in the family) till 1970. Toivo’s birth certificate lists his mother’s maiden name as Miene Hautala and early family photographs show her brother, Daniel Hautala and his wife Liina. The families must have lived close by to visit often, and Miina and Liina were like sisters and good friends.

Going back through Title Search Records, we know that the narrowest part of Bark Point (the Markkula property), was granted to John C. Higginson by President Pierce in 1854. In 1865, Consolidated Land & Mining Co. purchased it for $25,000. Four years later, the land was sold to a private individual for 1/5th of that amount. By 1883, it was going for all of $5.00 as it was being sold for taxes. This continued for the rest of the decade, whoever could pay the state tax got the deed to the land—including such Bark Point Pioneers as John Larson and his wife Sophia and Henry Hill and his wife, also named Sofia.

In 1908, the land on both the lake and the bayside of Bark Point was purchased by Henry Markkula for $500. It passed on in 1925 upon Henry’s death to his son Victor, daughter Ellen, and son Toivo,” one third each subject to dower interest of his widow.” At her death in 1956, she left the land to her three children. Did she live on Bark Point during this time? We only know for certain that Victor, who served in WWI (1917—1918), lived there until the end of his life.

The family fished, and the farm was self-sufficient with cattle, gardens, and fruit trees.  For extra income, the family trapped and raised foxes for pelts. Paul’s father Toivo, when he was courting his fiancée, gave her a silver fox as a gift—a high fashion item at that time. Daughter Ellen and her husband and family lived at one time on the farm as well.

Victor, daughter Ellen Raisanen, and Toivo’s widow (Toivo died in 1965)—who, as a guardian for her minor children—all conveyed the land in 1970 to Harold Ehlers of Cornucopia for subdivision. Victor, who had a life interest in the parcel where the house stood overlooking Bark Bay, had the right to live in the house for five years and had an easement agreement to Bark Point Road. Victor died there in the Markkula house in December of 1973.

Stuart Brent, who purchased part of the Markkula property on the bay side and was Victor’s neighbor during the summers when the Brent family lived on Bark Point, honored that agreement on a handshake, maintained a proper reserve and cordiality as fit between neighbors, and remembers Victor fondly at a 4th of July party (1971—1973) at the Brent home, dressed in his finest, (tip to toe) for such an occasion.

Stuart Brent loves Bark Point with a passion and devotion of one who has taken good care of the land. A newly planted orchard stands now in the front yard of the old Markkula house site for future generations to enjoy.

The pasture where the Markkula cow grazed and the fields where the strawberries ripened in rows—all now have mature trees, lots of wildlife, and new owners who appreciate both the sunrises and the sunsets over the blue, cool waters of Lake Superior. 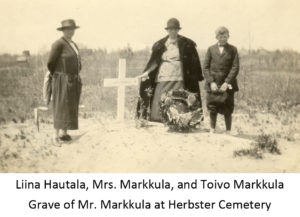