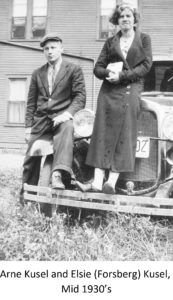 Elsie Forsberg Kusel was born on August 29, 1907, the oldest of five children born to John and Marie Forsberg, who were of Swedish descent. John and Marie Forsberg had emigrated from Vasa, Finland in 1900 and 1902 and were married on July 4, 1902 in Duluth, MN. They purchased a 40-acre farm on Bark Point where they raised children Elsie (Kusel), Arvid Forsberg, Lillian (Stark), Victor Forsberg and Roy Forsberg. The Forsberg children spent there childhood on Bark Point in Herbster, along with other children from the Town of Clover. Elsie learned to speak three languages: English, Finnish and Swedish.

When Elsie finished her schooling in Herbster, she traveled to Duluth, MN in search of employment. She worked in Duluth for a number of years and subsequently met Arne Kusel. Arne was born in Biwabik, MN on July 22, 1902, was raised in various parts of Minnesota, attended college at Hamline University, and had spent some years traveling around the country. He had two sisters, Ella Schilla, who lived in Aitkin, MN and Jessie Bourgoyne who lived in Duluth, MN. Elsie and Arne Kusel were married on April 3, 1935.

The Kusels lived in Duluth, MN for ten years, where their first four children were born. Richard was born on April 9, 1936; twin daughters: Dianne (Grage) and Joanne (Collins), were born on April 18, 1941; and Donald (Sonny), was born on September 20, 1943. Youngest daughter, Jean (Shreman), was born on January 24, 1947 after the family moved from Duluth to Bark Point in Herbster.

Elsie and Arne fulfilled their dream to live on beloved Bark Point when they purchased the Pete and Betty Hultman homestead (one mile from Elsie’s place of birth) in 1943, moving their family there in 1945. (Betty Hultman was Elsie’s aunt, sister of Elsie’s mother Marie Forsberg). The Kusel family raised strawberries, raspberries, apples and vegetables on their small farm. Arne worked as a welder in the shipyards at Superior for many years, as a mechanic, and in maintenance at a local school. Elsie was always extremely busy caring for their five children, baking, cooking, sewing, knitting, gardening, and maintaining their country home. Her favorite time was spent “in the garden,” a trait which has transcended to all of her five children. Her flower gardens were “exquisite” and she received much pleasure in growing a large variety of cultivars. 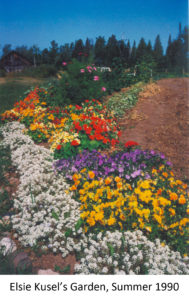 Elsie and Arne were avid readers. They taught their children to love nature and its inhabitants; to think for themselves; to value learning, reading and education; to practice organic gardening; and to be good stewards of the earth—the land, water and especially Lake Superior—and to appreciate and strive for peace and justice for all people. The “Kusel Kids” created “great adventures” on Bark Point, Bark Bay and the Bark Bay Sloughs. The area was their vast playground in winter and in summer, and likewise the playground of their children. The Bark Bay sand strip and Herbster beaches are favorite destinations of all of the Kusel grandchildren in the summer months for camping, hiking, canoeing, kayaking, picnicking, walking the beaches, quiet reflection and observing magnificent sunsets. Elsie enjoyed all children and considered herself “a very lucky Grandma”!

Richard served in the U.S. Army, worked as a material foreman for R. R. Donnelly Corp. in Chicago, and then decided to leave the big city. He moved back to Herbster and worked for Isakssons for 33 years until his “semi” retirement. He’s been doing miscellaneous jobs for the Town of Clover in recent years. He lives on the family farm on Bark Point and has one son, Dean, who lives in the Twin Cities. Twin daughter Dianne (Grage), (retired paralegal/legal secretary) and husband Glenn Grage (retired dentist) live on Lake Namakagon in southern Bayfield County, WI. They have two sons, Michael, living in Rhinelander, WI and Jeffrey, living in Marengo, WI. Twin daughter, Joanne, is a retired teacher. Joanne and husband Jim Collins (retired VP of Fuller Adhesives) live on Lake Namakagon in southern Bayfield County. They have two children, Jami Collins-Lillquist of New Prague, MN and Andy of Carlsbad, north of San Diego, CA. Donald (Sonny) served in the U.S. Army, worked as a technician at Xerox for many years, and is now semi-retired and driving truck. He and his wife, Nancy, live in Duluth, MN. Sonny’s two daughters, Lisa and Heidi, live in Duluth/Superior area. Jean Sherman (former teacher and now organic gardener and floral designer) lives in Port Wing, WI. She and Gary Sherman have two sons, Isaiah and Matthew, both living in the Twin Cities.