THE HISTORY OF THE CARL AND MARTHA HAARSTAD FAMILY 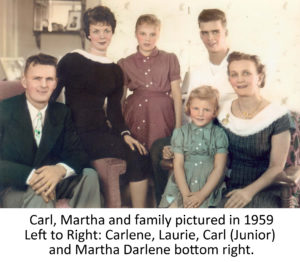 Carl was the son of Amanda and Conrad Haarstad who resided in Duluth, Minnesota.  Martha was the daughter of Andrew and Fanny Erickson of Herbster.

Carl, being a skilled Sheet Metal worker, had to continue employment in Duluth until he opened his own Sheet Metal business in Port Wing, Herbster, and Cornucopia area where they are still heated by furnaces installed by Carl.

Martha was a wonderful homemaker and mother of five children—Carlene, Carl Jr., Laurie, Darlene and Penny. She loved to embroider, cook and bake. She worked hard to create a warm family environment for her family and friends. A cup of coffee and bakery was always available for those who stopped to visit.

The Haarstads lived in the original family home that was built by Hjalmer Isaksson which is located halfway between Herbster and Cornucopia about a half mile west of Bark Creek on the north side of Highway 13. Carl was a kind-hearted person who did a lot of work for others for which he received no pay. Carl and Martha moved out of the area several times only to return to Carl’s beloved Herbster after each move.

Carlene and Carl Jr. (Buddy) both graduated from South Shore High School. Carlene went on to college to become a registered nurse. Carl enlisted in the navy and received training as a chef which was his occupation after leaving the Navy.

Carl and Martha’s lives ended at an early age as a result of tragic automobile accidents.  After their deaths, Carlene, the oldest daughter in the family and her husband Leonard raised her three younger sisters along with their own four children.

Carl Jr. also met an early death as a result of a house fire.  He left behind his wife Sheila and three young sons, Steven, Kevin, and David. They are the only heirs carrying on the Haarstad name.

Carlene lives in Superior with her husband Leonard Kavajecz, her childhood sweetheart, soul mate, and best friend. They raised five children: Penny, Shaun, Paula, Kari and Trev who have bought great pride and continuous pleasure into their lives.  Carlene is a very loving mother who also completed a highly successful nursing career of 45 years. She now is the grandmother of eight grandbabies—Traxx, Noah, Camren, Ethan, Maggie, Andrea, Nick and Kelsie. They warm her heart as she watches them grow and develop into fine young ladies and gentleman.

The Haarstad Homestead has been renovated and updated by Leonard and Carlene and has been enjoyed as a summer home throughout the years. Carlene’s children enjoyed many pleasurable days meeting new friends, swimming and lounging on the beach during their stays at the Herbster house. Within its walls are many happy times and fond memories.