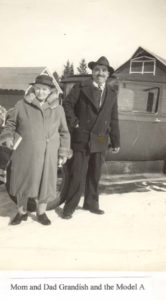 On March 22, 1922, Vaso Michael and Pauline Grandish arrived in Herbster with their family of three girls and two boys from Ford City, Pennsylvania. Their forty acres was not like the home they had left where Mr. Grandish had worked for the Pittsburg Plate Glass Company. In reminiscing, Anne said they found the change exciting. The first thing they did was change their report cards to move them up a grade ahead of the classmates they left in Pennsylvania. She said that worked well for everybody but her because she just couldn’t get 4th grade geography. She often thought up a stomachache so she could walk home after lunch and skip the class. Her teacher caught on before her mother did because her mom gave birth to Helen within two months of their arrival.

Herbster only had school to the tenth grade so in order to graduate from high school, each child had to leave home, take a job in a home that would allow them to go to school, and work for their room and board until they graduated. I am Gertrude, their youngest daughter, born in 1924 and was the first to attend and graduate from Herbster High School. All 12 years, right here. Marie and then Anne went to Duluth to get educated, but after graduation, Marie went to teacher’s college and Anne stayed on at the home she was in and worked at Stone Ordean Wells until she went into nursing and got her degree at the Mayo Clinic in Rochester, Minnesota. Anne had no room or board to pay so she sent her dad $5.00 every Wednesday. She lived on Park Point in Duluth and when she could come home for a weekend, she would take us three little girls to the beach in Herbster, and we learned to love and enjoy the lake.

Although our dad thought an education was the best thing we could do and Marie and Anne graduated from high school in Duluth, Pete and Betty in Ashland and Helen in Superior, George chose to go right to work. He drove a truck for Bill Hendrickson to get groceries and whatever else was needed for the Hendrickson store and then went to Chicago to work in the steel mills. He married Elva there and after a number of years, they came to Herbster and built a garage with attached lunchroom and living quarters which they name “The Lakeland.” We really thought that was the best thing they could have done.

There was always warmth and love in our home. It seemed that our mother was always working with our dad. At first, we felt sympathy for her but as the years went by and we married, we could understand the joy in working together to have a home. All of us worked at what we could do and there was a basic happiness in all things. Outside of our home, our greatest love was for the lake. I didn’t appreciate that it was Lake Superior, the largest salt free lake in the world. We just loved to go to the lake and go swimming. We’d change in a fish house on the pier, and always had to be home in an hour. Not much time when we lived fifteen minutes from the lake, but we got to go almost every day. And the beach parties in the evening! A bonfire and maybe roasting hot dogs or marshmallows. We always used Mom’s homemade bread for hot dog buns. She also would often stretch a raw bread loaf until you could see through it and then placed sliced fresh apples from the tree dad had planted, add cinnamon and white and brown sugar on it, roll I up and bake it after it had risen. What delight!!

Of course, the time came I was the only child left at home and Mom and I would walk to church every Sunday. Dad soon offered to drive us and then always went with us. One Sunday when we were riding to church, we saw all the cows were in the hayfield. Dad said he would put them back in the pasture when we got home and when we came home, we found they were all in the pasture. When I finally married Charles Diamon in 1946, Dad walked me down the aisle and he said that all the way I said, “There he is Daddy, there he is.”

Mom was a happy but very busy person. She would can everything. Because she always used the hot water bath for her canning, it was cooler to work at night. She would have me run to the store to get some things and would always say, “Hurry back.”

He was a barber. He cut our hair too. Helen and I had bangs and shingled the necks. He had a school bus. I would think the Bark Point Road would have been the longest because he drove horses and sleigh so much. I remember him telling of going up the Lenawee Road which was a six-mile trip one way too, and to the west of town. We could never ride the bus though because we were a mile from school. It was only meant for students who had farther to go. We always walked with the Sorenson children.

Everybody had a cash crop from their farm. Ours was strawberries and raspberries. Although we had only forty acres to work on, Dad sold whatever we could pick and then when we were through, we could go to Sorenson’s to pick berries for cash, for ourselves. We also had cows and pigs, and the horses. Still he helped build the church, was on the town board, and was the WPA foreman on the Lenawee Road. He was always busy.

Dad always said he could hear me coming home from school before he could see me because I sang so much. I know my favorite song was, “You Are My Sunshine.” After school each night, it was my job to fill the wood box. The woodshed was full of wood but Dad had to split it each day and would park his axe in a two by four near the door. One day, I bumped my head on it and it came down to make my skull bleed. He was so upset by that and I couldn’t realize what he was so upset for until I had precious children of my own and could realize their hurts.

Herbster was always a magic word to all of us. It brings warmth to our hearts of wonderful people, happy times, and the lake. When we talk about my father, I learn that we all worshipped him and are grateful for having him in our lives. We all feel we learned this love and respect from our mother who cared so much for him. Not she, or any of us, was ever disappointed. 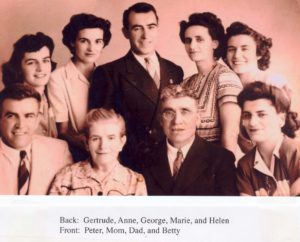