John Forsberg and Marie (Mary) Flinkfelt were both of Swedish descent and grew up and went to school together in Vasa, Finland. John, a hard-working and ambitious young man, came to America in 1900 landing in northern Wisconsin where his brother was already settled. Marie, an adventurous and brave young woman, traveled by herself for over two months from the “old country” to join John in Wisconsin two years after his arrival. They were married in Duluth, Minnesota on July 4, 1902.

John bought a 40-acre farm on Bark Point Road, two miles outside of Herbster. John was an excellent carpenter, and on his land, he cut trees down and built a two-story house for his wife and family. He built most of the furniture in the house too. He was also a farmer, and he built all the farm tools himself, as well as the barns and sheds that housed the family’s two horses (named Frank and Flora), the milk cows (the favorite one was named Molly), the young stock, pigs and chickens. The farm had strawberry fields and a large apple orchard with about 100 trees, and the fruit was raised to sell. John was also a seasonal commercial fisherman. He was very interested in politics and local government, and he spent time serving as a Road Boss, Constable, and a Town Supervisor in Herbster.

Like her husband, Marie was a smart, hard-working person of many talents. Marie raised five children and managed all of the household affairs. She did all of the knitting, sewing, cooking, baking, canning and cleaning for her family, while milking the cows twice a day, every day. Marie also planted and tended to a very large vegetable garden every year that included potatoes, corn, beets, beans, onions, peas, rutabagas, carrots, and lettuce. She was a loving mother and wife, and she always had coffee and baked goods ready for any friend that stopped by the home.

John and Marie had five children: Elsie, Arvid, Lillian, Victor and Roy. All of us grew up in a happy Swedish-speaking home and worked on the farm while growing up. A horse wagon or sleigh, depending on the season and the weather, took us to school in Herbster. We were all encouraged to study hard, play musical instruments, dance and sing. Our father built most of our toys—he could build just about anything, including sleds and skis. While both of our parents learned to speak English, our mother also learned how to read English by helping our younger brothers with American schoolbooks and lessons.

John and Marie, my parents, were good, honest people who taught their children the best things in life. We had a wonderful home.

Author’s note: I was 90 on October 2, 2005. I married George Stark in 1934 and we had two daughters: Susan Marie and Linda Mae. I have lived in Wisconsin and Florida my whole life, and I have five grandchildren (Warren, Richard, Mark, Kimberly and Christopher) and three great grandchildren (Ricky, Jeffrey, and Cindy). 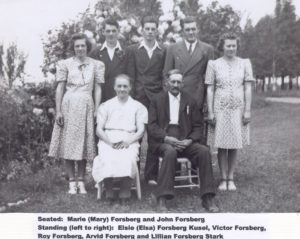