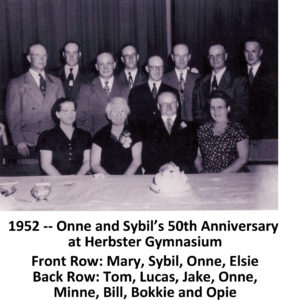 In 1902, in the town of Sneek, Holland, in the province of Freisland, Onne (Anne) Beeksma married Sybil (Sibbetie) Elzinga. They left Holland with their first born, William (Gabe) in 1905 and settled in Winnipeg, Canada for nine years. During this time, they farmed, gardened and peddled milk door to door. They also had four more sons, Bokkie (Bokke), Jack (Jacobus), Thomas (Thomus) and Minne (Minne).

Winnipeg was growing rapidly and the land and farm they rented was being incorporated in the city so they left Canada and entered the United Sates at the Emerson Border Station in April of 1913 under the Homestead Act. They settled along Lenawee Road in Herbster (Orchard City). Here they built the first of three homes out of lumber they salvaged out of the old abandoned lumber camps. During the next nine years, five more children were born: Onne (Anne), Opie or (Wopke), Lucas (Lucas), Mary (Marietje) and Elsie (Jeltje).

Onne had to travel to southern Wisconsin to bring back a herd of cows on the railroad and then they were nearly eaten alive by flies which were so bad. The boys remember often traveling by horse and buggy to the Lenawee Station on the Battle Axe line south of town for supplies.

Onne and Sybil (Mooka, as she was remembered by the grandchildren) remained and farmed on the corner of Lenawee & Carmichael Road (now Touve Road) in the last home their sons built for them. It still stands along with all the other homes and farms built on that corner. That corner became known as Beeksmaville.

Onne passed in 1956 and Sybil in 1961. They were married for 54 years and had 36 grandchildren and 98 great-grandchildren. Lucas and Mary are the only two living at this writing (2006) but the Beeksma name will go on for many years to come.