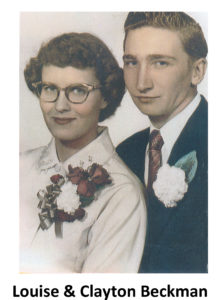 Clayton and Louise were married in Duluth, Minnesota on October 16, 1954. They resided in Detroit, Michigan for two years where Clayton worked for Chrysler Corporation and later worked for Chope Stevens Paper Company. They moved to Herbster in 1957 and lived on Highway 13 until 1969 when they moved to Louise’s parents’ home on Bark Point Road after Louise’s father passed away. Yvonne and Bonnie, their first two daughters, were born in Detroit, Michigan. Clayton Lee, Valerie, Rory, Bruce and Aaron, their other five children, were all born at the Washburn, Wisconsin hospital.

Both Louise and Clayton were part of the first group of volunteer EMT’s for the South Shore Area Ambulance in 1974 at its inception.

Yvonne Beckman married Mike Zordan in 1975 in Ashland, Wisconsin and currently works as a Licensed Practical Nurse for Prevea Orthopedic Clinic in Green Bay, Wisconsin. They currently live in Shawano, Wisconsin and have one daughter, Melissa who is married to Drew Farwell.

Bonnie Beckman met Earl Koski when she was serving in the U.S. Navy in Washington, DC while Earl was finishing his tour of duty in the Air Force. They were married at the Herbster Community Church on September 5, 1975, and live in Crystal Falls, Michigan. Bonnie is currently an advanced registered nurse practitioner in Upper Michigan.

Clayton Lee Beckman is married to Amy Myers of Rice Lake. They have three sons, Andrew, Eric and William Lee and currently live in Chetek. Lee also has another son, Brian Jacob, who will be attending Rice Lake Technical College.

Valerie Beckman is married to Rollie Walliin and resides in Ashland. Valerie has two daughters, Dixie and Rochelle “Shelly” Ellson. Valerie has three grandchildren, Hailee Marie, Nathan and Allen. Shelly has served in the Wisconsin National Guard. Valerie works as a licensed practical nurse for Court Manor in Ashland, Wisconsin. She has been at Court Manor for 28 years and currently is in charge of the restorative nursing program there.

Rory and Bruce Beckman both worked as nursing home administrators and executive directors managing senior care and senior living communities. Bruce is married to Gina Hollman of Lake City, Minnesota. Bruce and Gina have two daughters, Britta and Megan, and currently lives in Middleton, Wisconsin. Rory has lived in Florida and California for the past twenty years, as well as Texas, Louisiana, and Illinois. Aaron Beckman, the youngest of the seven children, lives in Portland, Oregon. He has produced news for T.V. in Eau Claire, WI; Kalamazoo, MI; Green Bay, WI and Portland, Oregon.

All seven of the “Beckman” children graduated from South Shore High School. Rory was the Salutatorian of the Class of 1980. Yvonne, Clayton Lee and Valerie Lynn all graduated from Wisconsin Indianhead Technical College of Superior or Ashland. Rory, Bruce and Aaron all attended the University of Wisconsin Eau Claire. Bonnie attended Michigan State in Marquette, Michigan receiving a Master’s degree in nursing. 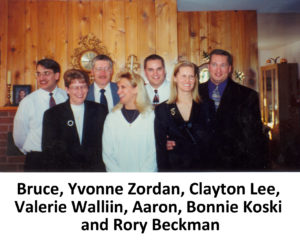