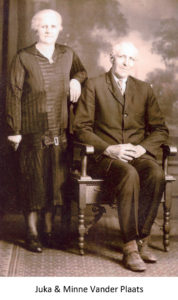 In 1912, Minne Hendrik Vander Plaats was smitten with wanderlust and a burning desire to go to America hoping to provide a better life for himself and his family. He left his cheese-making trade behind in Oosterlittens, Friesland in the Netherlands and traveled to Winnipeg, Canada with daughter, Boukje. In Winnipeg he and his daughter stayed with Onne Beeksma, his brother-in-law, who operated a dairy farm there. Soon his wife, Dieuwke followed with young Akke and the two boys, Jacobus and Hendrik and his oldest daughter and her husband, Maritje and Peter Sytsma.

They resided with the Beeksmas a short time until a man named Peterson, who was a land agent for northern Wisconsin, sold them tracts of land, sight unseen, near a settlement on the southern shore of Lake Superior called Orchard City.

Past fifty, she learned to bake bread for her family, dry apples and green beans, pick and preserve wild fruits and garden vegetables. The flies and mosquitoes almost drove her out of her mind, and many a time she thought what a God-forsaken place this new land was!  Then she’d think how marvelous it was to have the fruit and berries just for picking. As a pioneer woman, she had her faith and her dedication to her family. There were her five grown children living near her, and her husband loved his fields and crops, happy to be relieved of the daily grind of cheese-making.

The land developers offered glowing descriptions of Orchard Valley with advantages to settlers, which could hardly be matched anywhere, but to Deiuwke, life would prove challenging and difficult; the woods of northern Wisconsin were genuinely a man’s land.

A source of income for the Vander Plaats family was to sell cream and pick up cans from other families to be sold at the creamery in Port Wing. Later, they would shop at Ogren’s or Gidmarks’s store, where they were invariably invited in for a little conversation, and coffee or lunch.

Jacobus and Hendrik Vander Plaats helped their parents carve a small farm out of the northern Wisconsin woodland. The family income was supplemented by working for other settlers, building for them and helping them to clear their land. During these years, the Vander Plaats men also worked in the lumber camps. At one time, they were hired to tear camp buildings on the homestead. 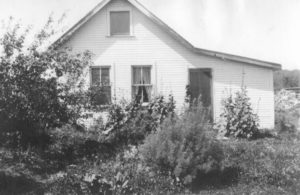 In 1913 many Hollanders were enticed by the land development company promotion of lush farming and garden land, but after the hardships were realized in the Orchard Valley, only the Vander Plaats, Beeksmas, DeJongs, Sytsmas and Leensvarts stayed.

The others found the area too wild and underdeveloped. It was more practical to leave for better farming land or more civilized settlements.

The fact that these people stayed to raise families and run small farms is a real testimony of the endurance, courage and spirit of community it took to make-a-go-of-it in the Wisconsin northwoods.

Died at the age of six in Holland.

Lived in Herbster as a farmer and lumberman. Unmarried.

Lived in Herbster as a farmer and lumberman. Unmarried.

Married Uno Okkonen. They had three daughters: Dolores (Wittwer), Donna (Kavajecz), Margret (Shaffer). Uno was a fisherman and Alice was a career teacher in Herbster.