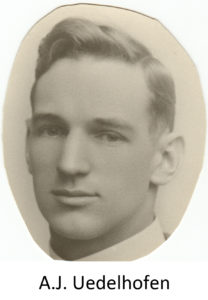 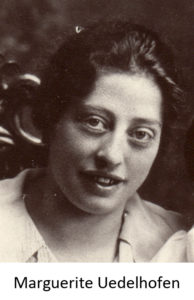 AJ and Marguerite built and moved to a new house south of the new school on Lenawee Road. AJ also built a new gas station and post office across from the school, eventually adding an ice cream parlor. The highway went past the post office so business was good. He also started fishing on the lake to add to his income. When the new section of the highway went through town, business dropped and they closed the gas station and gave up the post office. As years went by, the depression was starting, and times were getting hard. There was no work to be found.

AJ and Marguerite had eight children. Six girls and two boys, Marguerite (who was named after her mother), James, Callisto (Cleo), Robert, Eileen, twins Rita and Rae, and Barbra. The little house was getting quite crowded. They moved from a little house on Lenawee and moved to a bigger house on Main Street downtown. AJ worked on the WPA with many other men in town. He also went out west and worked for a year.

Upon his return from working out west, he got a job working with DuPont in Barksdale. He only worked there a short time when he died in 1940 leaving Marguerite a widow with eight children.

At the time of his death, the oldest daughter Marguerite had left home and was living in Chicago. James was with the CCC Camps, and Callista was working with relatives in Chicago. The remaining children at home graduated from high school and all went to the Chicago area.

As World War II approached, James, Robert and Callista joined the Service. James served four years in the Pacific and came home a war hero, having been awarded the fourth highest medal at that time, the Legion of Merit, for bravery during combat.  Upon his return home and being stateside for a year, rather than be discharged, he decided to enlist again and a day before he was to re-enlist, he was killed in an automobile accident at age of 26. Robert spent time in the Pacific, and Callista joined the Waves and was the first female airplane mechanic repairing airplanes in California where she met and married her husband Howard Engelbrecht, also in the Navy. When they got out of the service, they moved to Illinois and lived there until they moved to Arizona. Robert left the service and married Christine, and had nine of his own children, lived in California as a car salesman and manager.

Marguerite married Rudy Linhart in Chicago. They built a home in Wooddale and lived there until her husband’s death and then moved to California. Eileen and Rita lived in the Chicago area, both married. Eileen married Donald Halvey and Rita, Harold Dehn. Both lost their husbands, but continued to live there until 1990. Rae went on to Washington D.C., met and married her husband, a career Marine, Anthony “Ski” Lewandowski. They lived in various places until his retirement from the service and they moved to Medford, Wisconsin. Barbra met her first husband, John Cantieri, in Chicago. They were later divorced and she met and married Charles “Chic” Roberts in Chicago. They lived in Indiana until 1973 when he retired and they moved to Herbster. 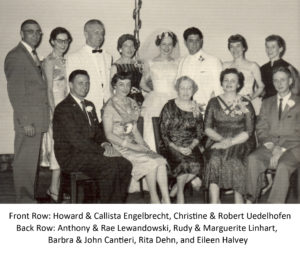 Although she had always said she was going to go back to Chicago, “Her Hometown,” Marguerite or “Udey” as she was called by everyone, stayed in Herbster after all her children left home. She was active in town activities, she loved all her friends, playing cards, going shopping, dancing. She had decided that Chicago was not the same as when she lived there years ago. She spent her winters with her children in Illinois and was always happy to “get back home” in the spring. She expired in 1972.

All of the children have since passed away, along with their spouses, except for Callista’s husband Howard, who sill lives in Arizona, and Rita and Eileen. There are 13 grandchildren, all living in various parts of the states. Rita and Eileen are the only two remaining. They returned to Herbster in 1990 and are presently living in the family home.