At the age of 27, caught up in the emigration movement of 1911, Sjoerd (Stewart) DeJong followed his aunts and cousins to Canada where they settled near Winnipeg.  For a time, he and his brother, Jack DeJong, worked in the large truck gardens of their cousin Klass DeJong. Then Stewart and Jack helped homestead at Dog Lake, Manitoba. There they were introduced to the excitement of seeing wolves and were amazed by moose grazing among the cattle. Also, Indians would come around looking for tobacco or food.  All this was quite an adventure for two young men from the Netherlands.

Stewart met Boukje Vander Plaats in Canada. Boukje traveled to Herbster with her family, and when Stewart arrived in 1914 they were married. The first home they lived in burned down, a dwelling place close to the Vietmeier farm today. Recovering from the setback, Stewart and Boukje (Bou), along with Stewart’s brother Jack, purchased forty acres near the Cranberry and Lenawee Roads. A small cabin was built where Daisy (Isaksson) and Dorothy (Burkland) were born. In 1920 the main farmhouse was constructed. They kept a large garden and a small herd of dairy cattle. Stewart DeJong did carpentry in the area. The DeJong brothers also took carpentry jobs long distances away to help with their finances. During the dark period of World War II when many boys from Herbster served in the armed services, Stewart worked as a shipwright in Superior.

The DeJongs were a typical Herbster family. They had four children through the years: Daisy (Isaksson), Dorothy (Burkland), Hugo and Maynard. As a family they worked hard, but there was time for going to church, visiting, reading, singing, listening to the radio, shopping in Port Wing and being very much involved in the growing community of Herbster. One of the highlights of Mrs. DeJong’s life was when she taught food preparation and handwork to Bayfield County women. Daisy drove her mother and helped teach Home Extension classes. Bou was famous for her eight-egg sunshine cake.

All their lives they maintained close family ties, the hallmark of many of the Herbster pioneer families. In 1941 the DeJongs gave up farm life and built a home in the town of Herbster.  Stewart lived to be eighty-eight and his wife, ninety. They passed their pioneer values on to their children and grandchildren, many of them avid community supporters and area residents. 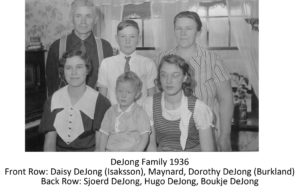 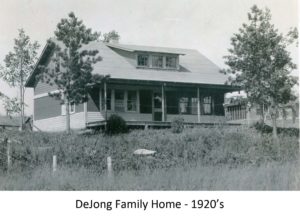