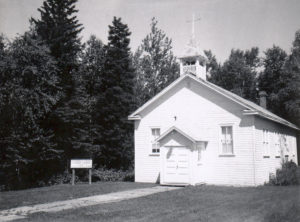 St. Francis Xavier was a very appropriate Saint to select for the patron and guardian of the new church built in Herbster, Wisconsin in the early twenties. St. Francis was one of the Catholic Church's most outstanding missionaries, having left his native land "to go and preach the gospel to all nations." Located on the south shore of Lake Superior, the little town of Herbster at first sight seemed to be the last outpost of civilization. Some of the people living there referred to Herbster as an isolated spot completely inaccessible except by private automobile, having no bus, train, or airplane connections whatever. For these reasons, St. Francis Xavier is a most appropriate patron saint for the far-flung parish on the south shore of Lake Superior amidst the pine and muskeg of Northern Wisconsin.

Although Herbster had its drawbacks, yet the beauties of the country attract people from the large cities. Here one finds some of the best known trout streams in the state. Many a fisherman is attracted by the Lake Trout off the shores of Lake Superior. It also has its share of deer to entice the hunters in the fall of the year. Really, the parish of St. Francis Xavier had much to boast of, being set in what is known as "God's Country."

In August of 1920, Father Amen of the Congregation of the Most Precious Blood came to Herbster to preach the gospel for the first time. He stated that he found 10 or 12 Catholic families asking for a church. At that time, mass was held once a month at the Carmichael home by Father Amen. Hedwig and Valentine Uedelhofen had lived in Herbster for five years. Hedwig loved the community but missed something very important in her life. A very religious woman, told her the small congregation would have to petition the Bishop to build a church. They followed through and one Sunday in February Father Amen read a letter from the Bishop giving them permission to build the church. 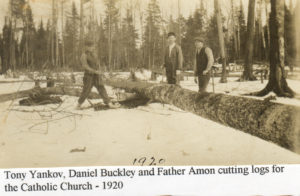 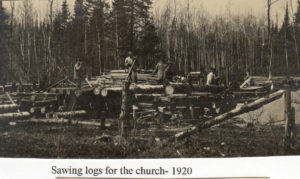 Carpenters were hired to erect the building. On many days when the ground was too wet to farm, other people came and pounded nails, carried boards, or sawed the lumber the carpenters would use. The walls were raised, the rafters were up and the roof nailed down. In June, the windows and doors arrived. The interior ceilings and walls were finished and the carpenters started to lay the beautiful floor.

Father Amen and the parishioners built the church with their own hands--priest and people working side by side, Catholic or not. The Uedelhofens, the Nicolettis, Biolos, the Rippis, Vander Plaats, DeJongs, Dr. Kleinhans, who also donated the land where it was built. The parishioners were not wealthy and they gave generously of their time and labor. The Extension Society donated $1,300.00 and Father Amen collected about $400.00 from the people and interested friends, along with the money from the people from Bark Point.

In August, the altar arrived and the pews and kneelers were made. The church was completed except for a bell in the steeple. Donated by Dr. Kleinhans, it was hung in the belfry and could be heard resonating its clear call to Mass, along the beach as far as Stoney Point. The organ was donated by the Luoma family. In September, the Bishop came to dedicate the church and the whole town was invited.

In January 1921, the first Mass was offered in the new church by Father Amen. He lived at Park Falls and came to Herbster with the mail carrier because no other transportation was available. The first parishioners were the DeGiacintos, Nicolettis. Uedelhofens, Buckleys, Dubays, Dehaenes, Machiewicz, the V. Uedelhofens, Mrs. Fetzner, Mr. Yankov and Mr. Kovac.

The first child baptized was Callista Uedelhofen on November 2, 1921. The first marriage was between Edward Powers and Stella Johanas on February 24, 1924. The first funeral was for Mr. Mackiewicz on September 1926.

At Christmastime, the women of the congregation would decorate the church with spruce boughs and a Christmas tree in the back of the church. Upfront on the side of the altar was the Christmas Creche with figures of the Holy Family and the shepherds and animals. Made in Germany, Hedwig Uedelhofen had bought them in Chicago and gave them in honor of the people who built the church.

The little church thrived with its congregation as new people moved into town--the Igo's, Driessens, Kuechlers, and many new members. Others moved away and as the years passed, the older members passed away.

In 1992 due to the shortage of priests and a dwindling congregation, the church was closed. The bell was taken to the cemetery where it now stands. As the years went by, the older generation passed on, and even some of their children are now buried there. You can go up there and ring the bell. It still rings loud and clear, as a tribute to all who rest there.

In 1992 when the church closed, Hedwig's great grandchildren found the creche wrapped in newspaper in the church. 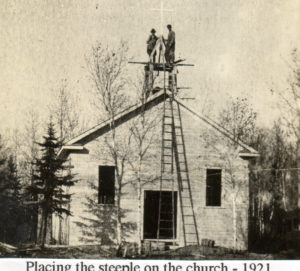 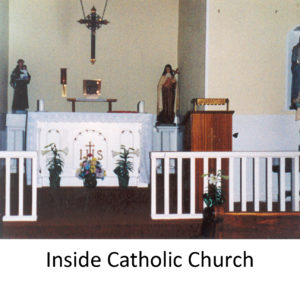