Susanna Ramstrom was born May 24, 1880 to Liisa. (Kangas Keisala) and Juha Edvard Ramstrom, a tailor, in the Tornava section of Seinajoki, Finland. Juha Ramstrom was born in Vaasa and moved to Seinajoki in 1843. He considered himself a Swede and encouraged their eight children to learn the language but Susanna would not, as she always had a strong dislike of the Swedish, having been under their rule for some 400 years. She didn't even like the color yellow as it was on their flag.

In later life, she changed her name to the Finnish version, as so many did, and was known as Susanna Rauhala.

Women were not required to attend school. However, to be confirmed in the Lutheran faith, they had to learn to read and write the language. She enjoyed reading all her life, especially biographies and mystery stories.

Matti Leppala was born April 17, 1885 to Maria Loviisa (Pajuluoma) and Matti Hermanni Ahlberg, also in Seinajoki. The Ahlberg name was changed to the shortened Finnish version of Leppala in 1906. The Pajuluoma family were big land owners and Matti Ahlberg went to work for them. Sons Matti and his brother Herman were often referred to as the Pajuluoma boys. Herman later changed his name to the shortened Luoma so the two brothers living in the same town in Wisconsin had different names. 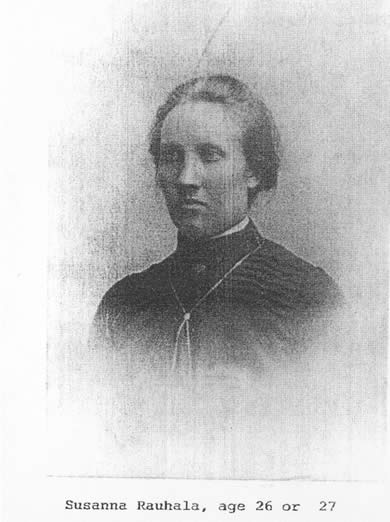 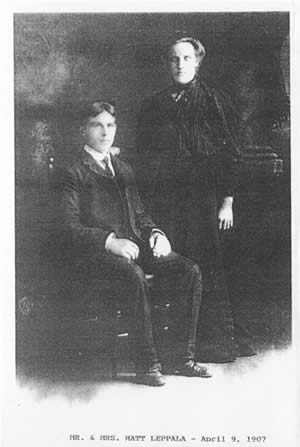 Susanna (Sanna) Rauhala worked in the "Pajuluoma" household and the romance between her and Matti led them to migrate to America in 1907. They landed at Ellis Island from the ship Teutonia on February 28, 1907 and officially entered America on March 1, 1907. They traveled to Pennsylvania, where Susanna's sister Sofia, who had married Jacob Kivisto, lived in Nanty Glo.

Susanna and Matt were married April 9, 1907 in Wintondale, where they lived for a year, and where Eino was born.

Since working in the coal mine caused poor health (they called it black lung) they moved to Wisconsin, where brother Herman had homesteaded a section of land from the U. S. Government. It was located along Lake Superior in what was later called Herbster.

Matt bought 20 acres at the far end of the section towards Bark Point, which at one time had a post office near the end of the road. They lived in an abandoned house in town that had been built by lumbermen who had harvested lumber in that area. It was referred to as cut-over land.

In 1908 they built their home from lumber from the house that had been torn down.

Matt worked winters in the Okerstrom Lumber Camp on the way to Port Wing in the early years. In January of 1925, Axel would harness up Beauty to the cutter and drive the wood trail through the woods to the camp located about six miles from home near the big ravine. The trip took three hours in below zero weather. While waiting for his father, who sharpened saws for the lumbermen, and Henry Markkula, a blacksmith who also lived on the Point Road, the camp cook fed Axel apple pie and hot chocolate. The horse traveling by lantern light, made it home in only two hours.

After their two week shift at the camp, they were not allowed in the house until the wives rushed them into the heated sauna and the clothes boiled in strong soap and lye. They then had the satisfaction they were not harboring bed bugs and lice.

Matt was a jack of all trades, carpentry, blacksmith, barber, and even repaired shoes and clocks in the early days. He was foreman for building the gym under WPA program in the late 1930's and early 1940's in use for the 1940-1941 school year. When asked about any project his reply was "I'll take a look of it", an expression he was well known for. Later it was learned this was Pennsylvania Dutch that he had learned when he lived there.

This shot of Matt was taken in 1960. Many of his artifacts remain around the property today. 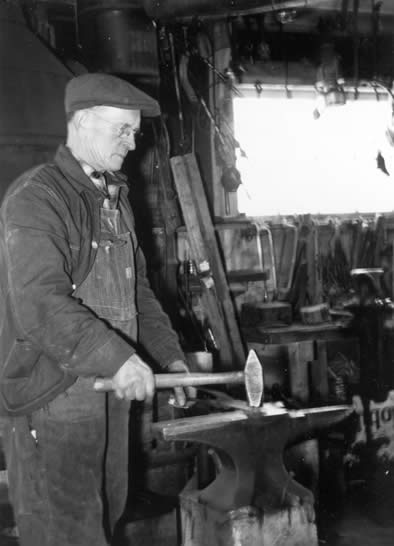 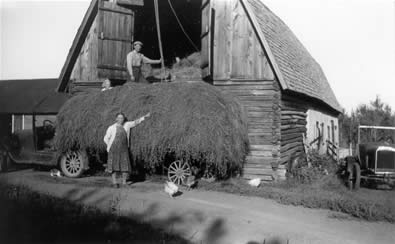 Working on the farm.

Matt, Susanna and daughter, Helnie. This barn is still in decent condition and sits on the East side of Bark Point Rd. Circa 1936

Food grown on the 19 1/2 acres fed the family well. Apple trees furnished fruit. The little garden furnished vegetables the mother raised and canned. Potatoes harvested in late summer were all stored in the cellar. Strawberries were grown for a cash crop to help pay the mortgage. First picking was usually on the 4th of July along the lake, though earlier inland. Picking had to be completed before the truck picked up the crates before celebrations in town could be attended. At the end of the season, the smaller berries were canned. Hulling 16 quarts of berries at a time was a great project. Up to three cows furnished milk and cream used to make butter in the big wooden churn with a handle to crank. Cream was also sold to the creamery for extra money. Calves were raised for meat, some canned for later use. A baby pig bought in the spring was fed scraps, rutabagas, etc. and butchered in the Fall.

Although the first five children, Eino, Arvo, Jennie, Axel and Johanna were born between 1907 and 1915, two more were born nine years later, Mayme in 1923 and Helmi in 1928. Education was important, with Eino, Jennie and Mayme attending business college, Jo received her degree in elementary education at Superior State, and Helmi in Beauty School. Axel was talented in mechanics, radio and TV and electrical repairs. Arvo became a bricklayer at the Steel Mill in Duluth.

Spanking was not very often administered, although the boys no doubt deserved it sometimes. Axel was asked by his Dad to cut a switch from the woods back of the barn and he hauled back a whole small tree, he said so he wouldn't have to go for more in the future. In the laughter that followed the spanking was forgotten. Respect, however, was expected., to people and property, their own and others. Thrift was a way of life, though not stingy but conservative. Waste not, want not, and recycling was practiced before the word was invented. Clothes were remade for the younger siblings and if it couldn't be used, cut into strips for carpets woven on the loom Matt built for his sister and wife.

After the porch and bedroom were added to the house in 1934, the loom was set up in the porch until the new sauna was built with large dressing room and laundry room. One did not tire of something, clothes used until they were worn out or didn't fit, furniture until it fell apart and could not be repaired any more. Strong work ethics were instilled.

Washing was by hand, white clothes boiled in a copper boiler on the wood stove, a wringer stand held two wash tubs for washing and rinsing. The rule was to not blow your nose in the middle of a hanky (Kleenex unheard of) but to start out in a corner to get more blows and make less laundry. Finally one year for Christmas the family bought a gasoline motor Horton washing machine. The exhaust pipe had to be installed to the outside. When the new sauna and dressing room was done, it was moved there where hot water was heated in the tank in the sauna.

Susanna in her 80's had mini strokes and Matt took care of her, wheeling her in the house in the kitchen chair he equipped with wheels. She died April 5, 1964, a few weeks before her 84th birthday. He stayed on at their home until he too had poor health. He was able to enjoy three trips back to Finland, in 1964 and 1966, and with Helmi in 1971. In the Fall of 1974 he moved to Duluth and lived with Helmi and Tom until heart trouble forced him to the hospital for several weeks. A nursing home became necessary and was transferred to the nursing home in Washburn in April, 1976. He celebrated his 91st birthday a couple days later. He asked Jo how old he was the following day, his reply to her answer "That's too much" and died the next morning, April 19, 1976. 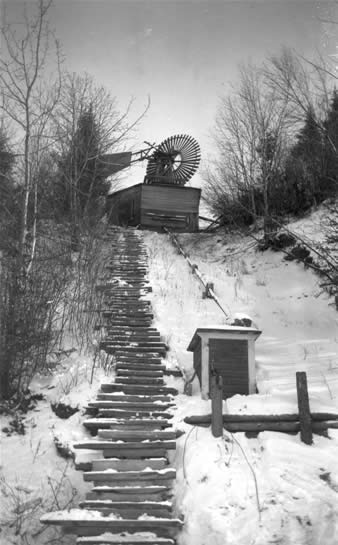 Windmill on the Leppala farm in Herbster, Wisconsin

For water, carrying it up the steep bank of over 80 steps, Matt fastened a ring into a large rock where the water was deep. This rock was called the Big Rock and a favorite diving place for the five oldest children as the water there was well over their head. With a pulley system to the top of the bank from this rock they brought water up until Matt installed the water system. After World War I ended, loans were available from the government and he borrowed $300 with which to buy a horse and material necessary for a well down at the beach. This was protected by a dock built of drift wood logs and anchored with large rocks. Strong storms did wash the dock away a few times although it did not extend into the lake as most docks were built. With a pump house part way up the bank, it would pump water to the tank house, across the road from their house . Gravity fed, it ran into the house and barn. If the cows were using it, pressure to the house was reduced.
He and brother Herman were the first to have running water in town. Since pumping by hand was hard work you did not waste water. The faucet was shut as soon as you were done using it. His sister, Sophia Hill's family, who lived inland on the highway, had an artesian well that ran continually and the faucet was often left running, Nerve wracking to those not used to it. A large windmill built at the top of the bank could be turned into the wind and pumped the water.

Matt Leppala was a very resourceful & creative man. He was the local farmer, blacksmith and barber.The building sitting below the windmill also housed the worlds first wind powered wood splitter! Erosion is a major problem along the South Shore. The stairs in this photo were washed away around 1981.

While Matt was very resourceful, he might well be in jail today for tampering with the hillside.

Learn More About Leppalas and the South Shore on Pinterest