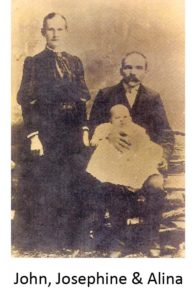 My grandfather, John Eric Kukkola (Hendrickson) who was born in Kokkola, Finland in 1866, left home when he was 12 years old. Initially, he traveled to Lapland to tend reindeer. Later he went to Norway and worked on fishing boats where he learned his fishing skills. When he came to the United States, he changed his last name to Hendrickson because his father’s name was Heikki, which is Henry in English. He settled in Ely, MN where he met and married Josephine Salmella. They had eight children, two of which died at birth.

John and family, along with the Okkonen’s and Riipi’s moved to Bark Point, WI in 1897. The Kauppi’s had moved there a year earlier and told the others there were government lots available to be purchased. There were no roads at the time, so they had to go by boat to reach Bark Point. In the winter, John had to go by skiis to pay taxes in Washburn.

Major logging companies had harvested the pine trees on Bark Point. The only trees left were Birch, Balsam, Cedar and Spruce. The first thing the settlers had to do was build houses for themselves, which they did out of logs cut from the remaining trees. Next, they built a one-room log schoolhouse. There was only one teacher to teach all the grades. The first teacher was Anna Christian who had to be taught the Finnish language by Mrs. Kauppi, since none of the children knew how to speak English. John, my grandfather and Mrs. Kauppi were the only ones who could speak English.

This is a photo of Bark Point school class of 1905-1906 pupils which includes Ida, Edith, and Alena Henrickson; William, Aili, and Otto Kauppi; Uno, Siama, and Esther Okkonen; and Alena, Charlie and Hilda Riipi. 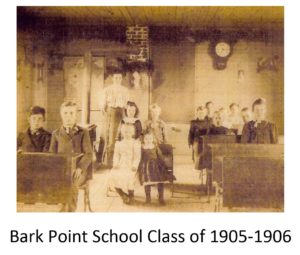 John was the first one on Bark Point to start fishing commercially. Initially, he sold fish to lumber camps across Bark Bay by the mouth of Bark Creek. He also used the fish to trade for supplies at Cornucopia. Later on, he would sell fish to Booth Fisheries and Goldish as well as steamer boats (Easton or America) that passed by Bark Point. 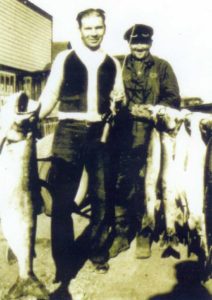 They didn’t get any mail the first year they lived on Bark Point. Around 1905, the road to Bark Point was made wide enough so they could travel with horse and buggy, then they started getting mail once a week. By the 1930s, the postal service delivered mail to individual mailboxes.

My father, William (Bill) H. Hendrickson was born on April 5, 1901. He had five sisters. After completing the 8th grade, he decided he would start fishing with his dad. In early 1929, they both decided to quit the fishing business. Later that year, my father purchased the local general store in Herbster from Victor Korppas.

Both my dad and Eino Okkonen learned to play the accordion. They both enjoyed dancing with the girls at the Finn Hall or playing their accordion for the dancing pleasure of others. They co-owned an accordion and would walk four miles from where they lived to the Finn Hall. They didn’t earn much money playing the accordion because they usually donated their time.

The Finn Hall, which was located just east of Winturi’s place, was built by the Finnish community as a dance hall. It was popular for many years, but eventually fell into disuse. With no one to make repairs, the building finally collapsed.

This photo shows Bill Hendrickson with his accordion at age 21 sitting on his 1920 1-1/2 ton Model T truck. In the background is the house in which he was born. 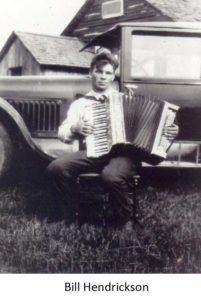 In 1937, Bill Hendrickson married Aili Kallio of Washburn, WI. They had two children, John, born in July 1938 now living in Akron, Ohio and Irene born in November 1939 now living in Herbster. A photo shows Bill and Aili on their wedding day. 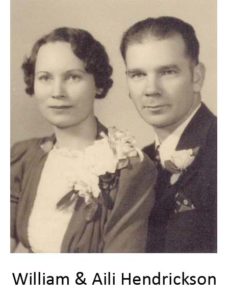 Bill operated the general store in Herbster until it burned down in January, 1939. In November 1940, he opened a new, much larger store. He operated this store until November 1946 at which time he decided to get into the logging and lumbering business with Roy Wegelius. Both families moved from Herbster to Orofino, Idaho where they purchased 80 acres of timberland.

Bill Hendrickson’s more detailed historical recollections are documented in his autobiography which was available to be seen at the centennial celebration. The autobiography contains interesting details and personal accounts of the first Finnish settlers on Bark Point.