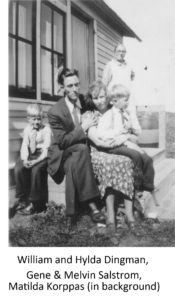 William and Hylda Dingman moved to the Aaron and Mathilda Korppas’s farm on Bark Point Road around the mid 1930’s, now known as Dingman Road. Hylda, born September 1, 1907 was the daughter of Aaron and Mathilda. She had one brother, Victor, and two sisters, Anna and Fanny. Hylda had two sons from a previous relationship. Eugene Salstrom, born July 6, 1928 and Melvin Salstrom, born June 21, 1930. William and Hylda had two more children: Duane born July 12, 1939 and Doreen born December 17, 1944. Mathilda Korppas died on December 20, 1943 and Aaron lived with Hylda and William until his death January 13, 1948.

William was a mailman on horseback when Herbster was Orchard City. He later worked for Isaksson’s for many years. He passed away September 10, 1957 at age 49, resulting from a tractor accident occurring at Isaksson’s. Hylda was a housewife and took care of the farm. After William’s death, Hylda sold the farm and moved up by Celinsky’s. She passed away September 5, 1967. Eugene Salstrom passed away July 30, 1988 and Melvin Salstrom on August 16, 1991. Duane Dingman lives in New York and Doreen lives in Wisconsin. 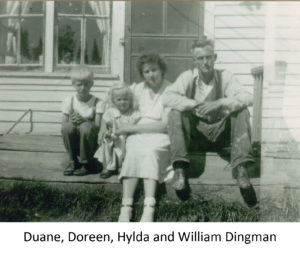