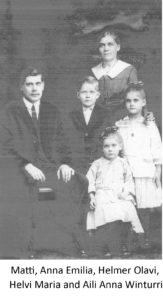 Matti Winturri, his wife Anna Winturri (Karialinen) and family (three children) came to Herbster in 1921 and settled on 10 acres, next door to Anna’s brother Jacob Kivisto.  Matti and Anna immigrated from Seinajoki and Kaustinen Finland in the early 1900’s and settled in Fitchburg, Mass. They worked in the textile mills and had two children.  In 1912, Anna had the two children returned to Finland for a visit. While in Finland, another child was born (Aili). In 1917, Anna and her three children returned to Mass.  In 1921, the family moved to Herbster where Anna’s brother Jack Kivisto was living.

The Winturri children were as follows: