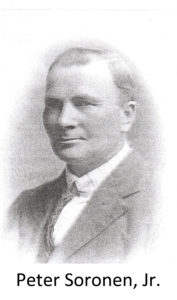 We’re appreciative of Robert Uedelhofen’s written history in “Cranberry Chronicles” for dates & events of the inhabitants of early Herbster, including our ancestors, the Soronens taking the liberty to use Sr. & Jr. after the Peters’ names to clarify each one.

Our great-grandparents, Peter Sr. & Margreth emigrated from Finland with 3 sons, Jack, age 17, August, age 15, & our grandfather Peter Jr., age 13. They arrived in the USA on July 28, 1893. They settled on 40 acres of which included the shore property at the corner of Bark Point Rd. & Old Schoolhouse Rd. The current Beach Resort located there is a part of the stated location.

Following are some dates and positions for some of the Sorenons in early Herbster.

1907 (April 22) Peter Jr. was the acting chairman for the Township of Clover & presided over the very first meeting.

1910 Peter Sr. was elected Justice of the Peace & August was elected as one of the constables. 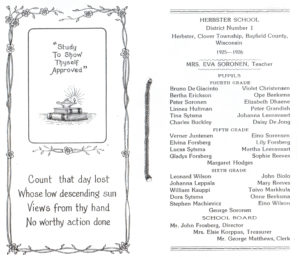 1913 Peter Jr. owned one of the first cars in Herbster. He also owned & operated saw mills at various times & locations.

1929 Prices of lumber sank after the stock market crash & Peter Jr. shut down his saw mill.

Besides the people in our family background, we have “object” that has been almost as an important in our lives. We don’t know in which year our grandfather (Peter Jr.) bought the Cornell house on “Old 13”, but this house is where we spent most of our childhood summers. We are thankful to see the house restored to its former glory. It must be amazing to everyone in Herbster as well as for ourselves that the dilapidated house didn’t burn down through a lightening strike or by any other means. There isn’t any recollection of it being repainted. After reading Bob U’s account of the house on page 25 of the “Cranberry Chronicles”, I believe, now, that God honored this house of Cornell who was considered a reverent man & praised our Father in heaven. The house was spared and brought back to life to be a blessing again.

Our grandmother, Eva, was definitely the next Christian to inhabit the Cornell house. She knew and loved the Lord. Her prayers kept us safe in our upbringing in Superior and brought us to the Lord. She was postmistress in Herbster in 1916 and besides teaching in elementary grades; she assisted as a mid-wife from time to time.

Our father, Robert Browne, and his parents, Harvey & Blanche, and two siblings: Helen & Madelyn lived in Herbster in the late 1930’s. Blanche’s grandparents (Charles Gassman) lived there during some of that time. They were somehow connected to operating the Herbster hotel. This hotel was located near the present log auditorium that is on the Lenawee Rd.

We have the pleasure to returning each summer to reflect on family history and to soak in the sounds & sights of “The Lake.” Our mother, Margaret, who gave us the love of “The Lake” would often reminisce her days of growing up on their homestead where her bedroom window faced the lake. She never stopped hungering for the peace and solitude that the lake provided for her. And now, that’s what it does for us. 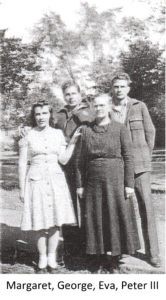 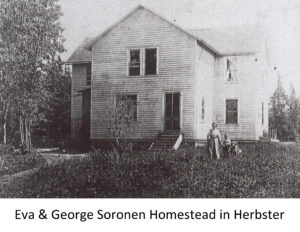