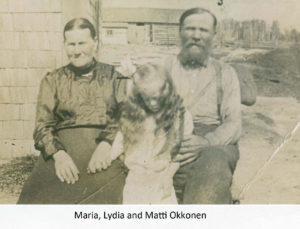 Matti Iikka Okkonen and Maria Okkonen (Saukkonen) were born and raised in Lumijoki, Oulun Laani, Finland.  They were married in Finland in 1890. Their first child, Martta, was born there in 1892. That same year Matti came to America. In 1893 he made arrangements for Maria and Martta to come to America also. They settled in Ely, Minnesota where he worked in the ore mines. While in Ely, three more children were born to them; Esther, Siama and Uno. Matti disliked working in the ore mines, so in 1900 the entire family moved to Bark Point, Wisconsin. While living on the Point, four more children were added to their family: Elizabeth, Eino, Effie and Lydia.  Elizabeth was the first female child to be born on the Bark Point. The children attended a one-room school on the Bark Point. 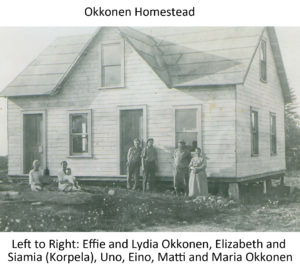 The Okkonen family enjoyed a life of farming and fishing on their Bark Point homestead.  Matti died July 2, 1927 and Maria died June 24, 1949.

Siama—Married Frank Korpela and lived in Cloquet, Minnesota. They had one daughter, Elizabeth (Capestro).

Uno—Married Alice Vander Plaats lived in the Dubay house in Herbster. Uno was a commercial fisherman all his life. They had three daughters: Dolores (Wittwer), Donna (Kavajecz), and Margaret (Shaffer).

Eino— Married Helvi Wintturi and lived in Herbster, Wisconsin. Eino was a commercial fisherman most of his life. They had three children; Wilho, Louise (Martin) and E. Arnold.

Effie— Married Elmer Nigard and lived in the Okkonen house on Bark Point until they moved to Florida.  They had one daughter, Elaine.

Lydia— She was a Downs Syndrome child and lived with her mother for her entire life. 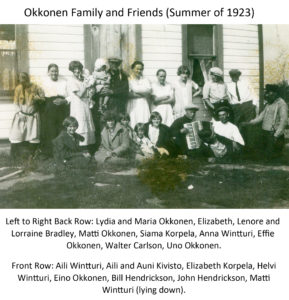