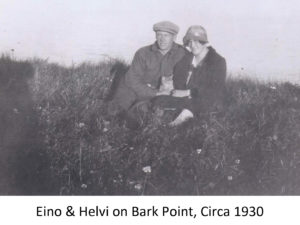 My father Eino J. Okkonen was born near the end of Bark Point in 1903 and lived his entire life of 93 years in Herbster. My father and his brother Uno became commercial fisherman as that was the primary way they could earn a few dollars to survive in the area. Logging was in decline, farming was difficult at best, and other work was not available on a regular basis. They continued fishing until 1955 when his brother Uno passed away. Eino then went back out on the big lakes working on the ore freighters until he retired at the age of 65. After that, he worked at a number of different jobs in Herbster for a few more years until he finally fully retired and lived a life of relative leisure until his passing in 1996. 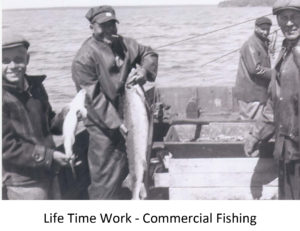 My mother, Helvi M. Wintturi, was born in Fitchburg, Massachusetts in 1911 and moved to Herbster with her family in 1921 to a place on the Bark Point Road about a mile from Herbster next to Jacob Kivisto, Mrs. Wintturi’s brother. During the early 1900’s, the entire length of the Bark Point from Herbster to its end was inhabited primarily by people of Finnish extraction, and my parents were part of that group.  Bark Point almost became a town back in those days as they had quite a concentration of people with a store, school and even a postal destination on location, but as travel became easier, the big town of Herbster 4 miles away took over.

My mother and father were married in 1933 and resided in Herbster all of their lives. They raised three of us kids; myself, Louise A. M. and E. Arnold (in arrival order). My mother always said they had just the family they had planned on, but I’m not sure that we lived up to all of their expectations? We had a normal household, which primarily revolved around dad’s fishing occupation. We did not have much, but enough to eat and a couple little gifts on Christmas and on our birthdays. We always had fish (fried, boiled, salted, smoked, patties, fish eggs—salted and fried, and every way known to my folks), venison (off and on pretty much all year round), milk and butter from Grandma Wintturi’s cow and lots of bakery items made at home. Mother canned almost everything: fruits, fish, meat, and vegetables. We generally had blueberries for our rice pudding and pancakes all through the year. We had hard winters (cold and snow), and just about all of the communicable diseases that came around plus a few others, but we survived as best we could. 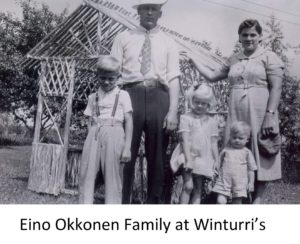 Eino and Helvi loved to dance, sing, and visit other folks. In the early years, Eino played the accordion on occasion at some of the dances the Finnish people held at the old Finn Hall, and they went to almost every dance in the area over the years. We visited relatives and others, celebrated birthdays, went to fairs, and had other gatherings quite often. The Finns of Bark Point were a sociable group in the early days as they practiced their Finnish Heritage. In later years, Eino and Helvi were willing to do and help us in any way, they were very giving and family oriented. They always said, “We had a good life and would not know how or even want to change it if we could.”  They were very good honest people, and their family and Herbster were fortunate to have them around for as long as they did.